Integrate our technology to create a research tool in step with the principles of combinatorial catalysis. Each part of the system is designed to complete a different step in our view of the combinatorial process. These steps are:

Each of these steps described below with its corresponding research tool.

After some time is spent researching the kinds of materials best suited to deal with a problem, the scientist prepares an initial batch of samples for study in the combinatorial version of our IR reactor. This version is designed to study up to 50 samples at a time using IR thermography . The best set of samples are chosen for secondary screening in the COMBI reactor.

While the early screenings are done with multiple samples, scaling up requires knowledge of the reaction kinetics. The RIG-COMBI has a micro-reactor with a recycle option that allows the researcher to obtain detailed kinetic information to be able to scale-up the results to process conditions. This stage is the most time-consuming, but the chance for success has been drastically improved by the earlier screenings. Instead of having to test each of the original 50 samples, we only test the one or two samples that have been succesful in the first and secondary screenings. 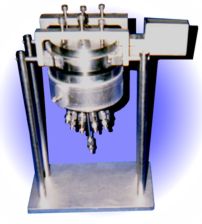 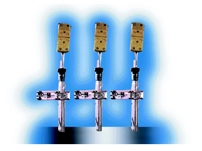 To best understand the nature of the catalytic activity occurring on the sample, a scientist must characterize the material in several different ways. This can be a time consuming process. The new Multi-Characterization Module gives scientists the ability to optimize their characterization time by loading several chambers at a time,
combining preparation time and programming the conditions to optimize the use of the existing analyzers.

With the new data gathered through this process, the scientist will have a clearer understanding of the nature of the problem, and the whole process can be repeated to optimize the catalyst.